on July 17, 2015 By kputnam In Articles Comments Off on #ditchtherisk 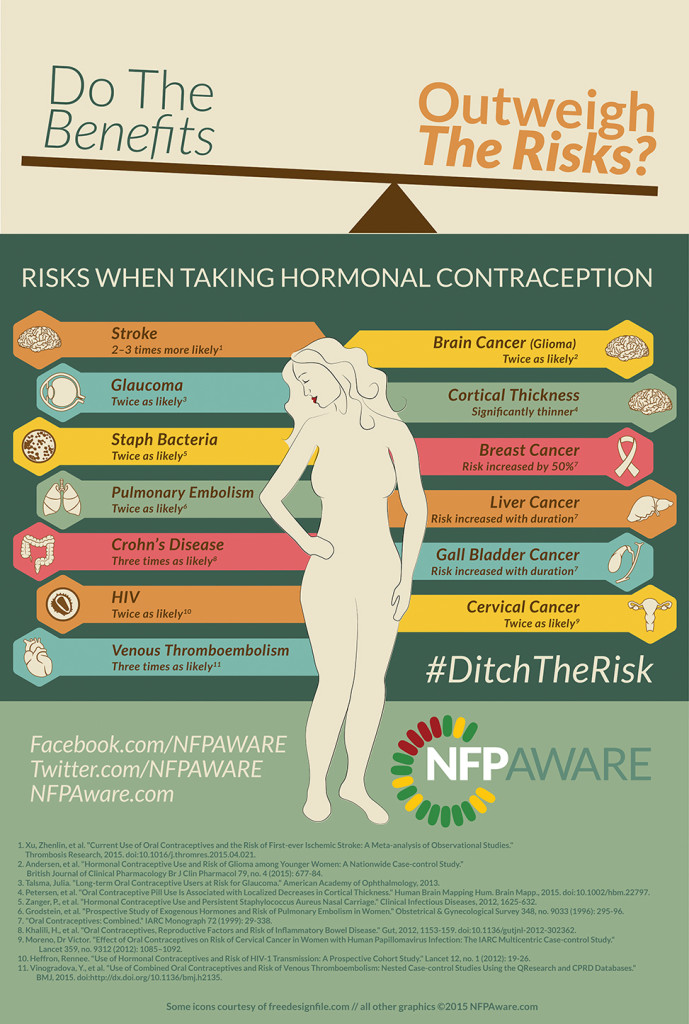 The great news is, you do not have to fill your body with harmful steroids in order to postpone a pregnancy!

The Billings Ovulation Method® is 100% risk free and 99.5% effective. Billings is a method of natural fertility management developed by Neurologist, Dr. John Billings, in 1953. With help from Pediatrician, Dr. Lyn Billings, Biophysicist, Dr. Erik Odeblad (the father of the MRI), and Endocrinologist, Dr. James Brown. The method is based on the observation of one simple symptom, day by day, making it simple for every woman to recognize her patterns of fertility. This includes you, even if you experience irregular cycles, even if you’re a postpartum mom, even if you’re approaching menopause. If you have been diagnosed with PCOS or Endometriosis you can still effectively use the method, and because of the extensive research, the method can even help you pinpoint the cause of your ovarian dysfunction.

Why settle for less? Contact us today to schedule your free informational session.

Feel free to print this as a poster provided that the image is not altered and the copyright is left intact.

Personhood and “the Pill”

on November 7, 2011 By kputnam In Articles, Medical Journals 2 Comments

The following article is not meant to endorse or disparage any political position or candidate. Rather, it is meant to help us examine ourselves and motives in the light of a recent events.

During a recent appearance on Fox News’ “Huckabee,” presidential hopeful Mitt Romney stated that he was in favor of the Personhood Amendment, which declares that human life begins at conception. Shortly after this, Romney was at a town hall meeting in Iowa[1] where a woman stood up and voiced her concern that the Personhood Amendment would outlaw hormonal contraception, which is used by millions of women. Without missing a beat, Romney responded that he was not against hormonal contraception. He was against anything that effected life after conception, “contraception prevents conception. I am not against that.” The concerned citizen continued and urged Romney to have staff look into this statement because it is known that hormonal contraception prevents implantation, not always conception. He smiled, said thank you and changed the subject. END_OF_DOCUMENT_TOKEN_TO_BE_REPLACED

on August 16, 2011 By kputnam In Articles, Medical Journals Comments Off on Clinical Trials: IUD vs. Billings Ovulation Method™

In July 2011, the American Journal of Obstetrics and Gynecology released a pamphlet stating several doctors’ endorsement of Intrauterine Devices (IUD) as “as safe and effective birth control.” IUDs were once unpopular in the United States, nevertheless, use has persevered. Physicians are starting to recommend IUDs more frequently, especially non-hormonal, copper IUDs. However, as Delicia Yard of ClinicalAdvisor.com points out, “The devices may raise the risk of pelvic inflammatory disease and subsequent infertility.” Prescribing information for a popular IUD lists these common side effects: headache, abdominal/pelvic pain, irregular bleeding, depression, migraine, nausea, acne, back pain, genital tract infection, ovarian cysts, dysmenorrheal, breast pain, and unintentional expulsion of the device. Despite this, it has been said that IUDs are “the most cost-effective form” of birth control available.

How does this newly popularized birth control stand up to the Billings Ovulation Method™ (BOM)? END_OF_DOCUMENT_TOKEN_TO_BE_REPLACED